While A, B
Both actions A and B are occuring at the same time. Emphasis is placed on the second action (B) in the sentence.
Join for free or Login to study this and other grammar in the lesson Mixed Review! 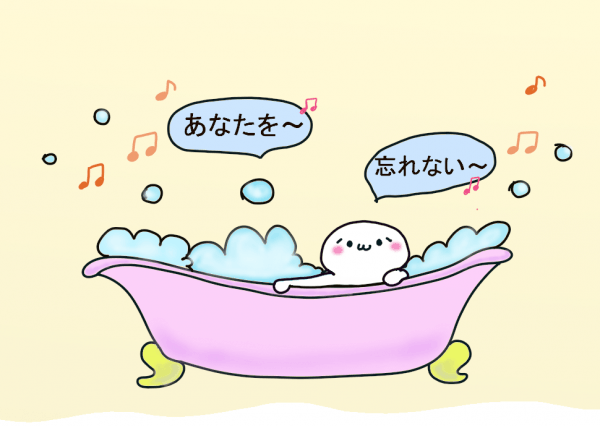 I sang while I took a bath.
好
22点
I wait for her while I read a book.
好
7点
Wow! Mr. Tanaka is jumping while he sings.
好
22点
Please don't use a cellphone while driving!
好
22点
My mom always watches TV while she is eating breakfast.
好
14点
Every night I watch TV while eating dinner.
好
6点
Mr. Yamagawa was talking to his family while he watched TV.
好
6点
Is it cool if I read a book while I have a snack?

The verb in A is made by adding ながら to the stem form (ます-form).

here are some set Phrases that use ながら with them

ざんねんながら・残念ながら＝im afraid to say that

はずかしながら・恥かしながら＝i am ashamed to say that

とは言いながら＝with these words
10 years ago

Generally speaking, in this construction the more 'important' action is the latter of the two, and the lesser one is the former: for example 電話で話しながら仕事をする talk on the phone while doing work - doing work is more important, talking on the phone is what's going on during the other action.
11 years ago

The same subject must be perfoming both actions; there cannot be a different subject for A and B.

I read a book while I was waiting on the girl.

The boy read a book while I was waiting for the girl.

The grammar structure ~間/あいだ means the same as ~ながら, but A and B can have different subjects.

This structure can be used with verbs A that span a long period of time.

My father got a scholarship to go to college.

Verbs that are continuous or which indicate actions/effects over a period of time can be used for A.

Verbs that are one-time/instantaneous cannot be used for A

The boy read a boy while I was waiting for the girl.

Perhaps this should be "the boy read a book"?

Also, looking at the "fixed" sentence for that example, I think it's a little vague how the incorrect

is changed into the correct

In the correct sentence, aren't there still two actors, 私 and 少年? Is it acceptable because only 少年 is marked as the topic of the sentence using は? (In any case, it might also be clearer to use either 少年 or 男の子 in both sentences instead of changing it, which was probably an oversight.)
好
1点
13 years ago (Edited 13 years ago.)

On a side note, は became が because the 私が彼女を待つ間 part is a subordinate clause, and 私 is not the main subject of the sentence, 男の子 is.

I agree that it shouldn't have switched to 少年, though. And shouldn't it be 間に?

The site doesn't know how to mark parts of the sentence red/green yet, aside from the model sentences. Is something I'll have to add in later. I will fix the noun, the typo, and add a bit more explanation about correction.
好
0点
13 years ago

PS: I talked to slicycheese, and she said that に isn't required (just a bit more formal is my guess).
好
0点
13 years ago
sandstone
Years Studied: 7
Studying: JLPT ２級
Level: 1, 好 : 17
Ah, somehow I managed to completely gloss over the 間 in that sentence, thanks for pointing it out キャシー! I had guessed that the が made it a subordinate clause, but somehow managed to completely miss that the particle had changed...

Thanks for clearing things up, マイケル.
好
0点
13 years ago

キャシー
Level: 1, 好 : 109
I had the feeling that に might be a bit on the optional side, at least in everyday speech, but since that's how I learned it I thought I'd mention it.
好
0点
13 years ago
happypuppy
Native speaker Level: 1, 好 : 18
I'd like to add some explanation about the difference of "間" and "間に".

1) "間" indicates the breadth of a defined amount of time that has a beginning and an end. Therefore after "間" a word expresses a continuous action or condition comes.
Ex.
・校長先生が話している間、その生徒は（ずっと）寝ていました。
The student slept (all the time) the principal was talking.
・春休みの間、毎日友達と釣りに行きました。
I went fishing with my friend every day through the spring break.
・私が夕飯を作る間、弟はテレビを見ていました。
My brother was watching TV during I was cooking dinner.

*In other word, you use an expression of continuation with "間", while you use “間に” with expression shows that the event/action happens and/or ends in a moment.

I think this is one of the difficult parts for English speaking students,whose language doesn't have such restriction on verbs/predicate you can use with a specific expression. I hope my explanation will help your understanding of "間" and "間に".
好
4点
13 years ago

Thanks a lot - I'll stick this up after I make an 間/間に page.
好
0点
13 years ago
dfperfume
Years Studied: 1
Studying: JLPT 4級
Level: 1, 好 : 24
Oh man. So technical and specific. At the advanced notes, it says that 間 can be used the same as ながら。Does this mean that I can replace all ながらs with 間s, but not the other way around?
好
0点
12 years ago

Yes, that is how I understand it. I've gone ahead and added the page with the 間 notes, and linked it to this page (link is above)
好
0点
12 years ago
guest
Actually. When using ‾ながら the main action should be the latter. If you study Japanese grammar you notice that the message they convey appears on the last part of their sentence. For example, わたしのなまえnameです. Or 犬と散歩しています。I'm strolling with my dog. inu to...
好
0点
10 years ago

Satchmobgw
Years Studied: 4
Studying: JLPT N1
Level: 1, 好 : 93
I'm probably just picking at little things here, but wouldn't the model sentence be "I read a book while waiting for the girl." as opposed to the other way around?
好
0点
10 years ago

キャシー
Level: 1, 好 : 109
Unless the translation has been changed in the last seven hours, that's what it says - but the highlighting is in the wrong place, so maybe that's what you meant? It really should be " I was waiting for the girl." (Brackets marking highlighting).
好
0点
10 years ago

Satchmobgw
Years Studied: 4
Studying: JLPT N1
Level: 1, 好 : 93
Hmm, maybe I mixed it around. Anyway the example is
"本を読みながら彼女を待ちます。" Right?
Wouldn't it be "I waited for the girl while reading a book" as opposed to "I read a book while waiting for the girl"?
It's pretty much the same meaning in English, but it should be pretty precise for a grammar lesson right?
好
0点
10 years ago

キャシー
Level: 1, 好 : 109
No, the example is correct. The main act was waiting for the girl - that's what defines how long the other action lasts, or what triggered them happening at the same time, so that's the one that follows "while". English is flexible enough that you can get away with saying "I waited for the girl while reading a book," because we know what you mean, but technically that implies that the main action is reading the book.

It might not be as obvious there, because the actual meaning - that you're waiting for her while you read your book, and once you're done reading you're leaving whether she's there or not - doesn't seem right, so we automatically interpret it the other way.

Think about "I watch TV while I do my homework" versus "I do homework while I watch TV." In the first, you are in the habit of turning on the TV when you sit down to do homework, while in the second you are in the habit of picking up your homework when you sit down to watch TV, and you've probably got more attention on the TV in the second case than in the first. We feel like we can interpret it the other way if we need to because English is less strict on this, but technically that's the right way.

One reason you might be inclined to write it the other way around is that it puts more emphasis in the sentence on the waiting, which is clearly more emphasized in the Japanese; to put the emphasis on the waiting rather than the reading, you change the order of the sentence: "While I wait for the girl, I am reading a book." Semantically, this sentence is identical to the original sentence, but it emphasizes the waiting and makes the book reading less important.

The problem with translation is when you get into translating too closely, because English and Japanese don't always line up. When I read the example sentence, it actually came across my brain as "Reading a book, I wait for the girl," which of course feels stilted and formal, but probably follows the Japanese more closely.

I can definitely see where confusion came in - in the example sentences, three out of the four are in the order you suggested, with the fourth one the other way, but the usage notes match the example sentence. The trouble comes in that ながら is actually not a whole lot like "while", but it's the easiest equivalent to use. They have different rules for choosing which part goes where, which sometimes line up and sometimes don't. :P
好
1点
10 years ago

Satchmobgw
Years Studied: 4
Studying: JLPT N1
Level: 1, 好 : 93
The difference between the example sentences is what gave me the confusion, but I see what you mean. Thanks a ton.
好
0点
10 years ago

テリフン
Years Studied: 3
Studying: ＪＬＰＴ Ｎ3
Level: 1, 好 : 274
Hello! This can also be used in the past tense, right? For example, would this be correct? 朝ご飯を食べたながら、日本語を勉強しました。
好
0点
9 years ago
guest
No, the tense is determined by verb at the end of the sentence. 「朝ご飯を食べながら、日本語を勉強しました。」 I studied Japanese while eating breakfast.
好
3点
9 years ago

Mooglegirl
Years Studied: 二年間
Studying: Going wherever my class takes me for now!
Level: 1, 好 : 89
"Both actions A and B are occuring at the same time. Emphasis is placed on the second action (A) in the sentence." I'm a bit confused here. Wouldn't the second action be B? Or am I interpreting this wrong?
好
1点
7 years ago

Yes - the English was correct, but the letter marker was not. Fixed!
好
1点
7 years ago

I just noticed that the first example sentence might be translated wrong; wouldn't that be "I waited for her while I read a book"? I already gave it a suki point without noticing so I can't correct it that way.